BARLA THREE COUNTIES CHAMPIONSHIP 2019 IN ‘OURLEAGUE’ OF OUR OWN

BARLA’s Three Counties Championship kicks off next week Sunday 27th October and it will be in ‘OuRLeague’ of its own with this the first of nine games all being streamed live on the OuRLeague App.

The first of six live game begins with the Under 17’s opener when Cumbria entertain Yorkshire at Millom ARLFC the oldest rugby league club in the country, with a 2.00pm kick off.

Eight days later see’s the final game of the competition on Sunday 17th November Yorkshire face Lancashire at Heworth ARLFC at 1.00pm & 2.30pm in a double ‘War of the Roses’ clash.

“BARLA are delighted that all nine games of the BARLA Three Counties Championship are being steamed live on the OuRLeague App for the first time in the history of the competition this year and would like to thank the Rugby Football League for this opportunity.

“It is a great opportunity for the players from all the three counties to showcase their bravery and skills on a wider platform to audiences who can’t get to the games which we would encourage them to do, and to a new audience that has yet hasn’t been introduced to the amateur game.

“Last year saw a clean sweep across the board at all age groups by the red rose of Lancashire, no doubt Cumbria and Yorkshire will have something to say about that this year and will endeavor to knock the respective champions off their perches. It should be another cracking series.” 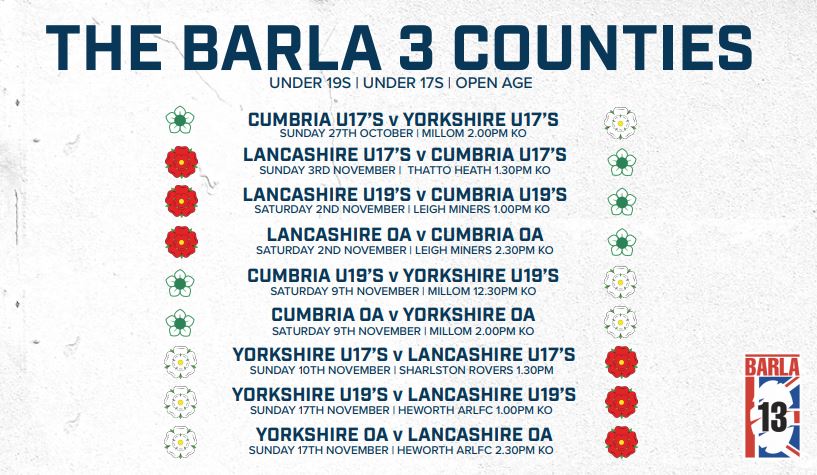